Mindset in Action
< Back
Next >

As a high school math teacher, I hear over and over from families that their struggling student has "always" struggled in math and isn't doing well because they themselves didn't do well in math. This information that families share has shown me just how deeply rooted fixed mindsets can be and how people who exhibit a more growth mindset in some areas can hold very fixed mindsets about math. Many families are unknowingly telling teachers that math ability is based purely on genetics and not on the effort and experiences of their students. When working with students with a fixed mindset in math, in particular, I have found some strategies to be helpful in gaining some ground towards a growth mindset.

After noticing this pattern of deeply held fixed mindsets, I started to wonder why math, as a subject, is so 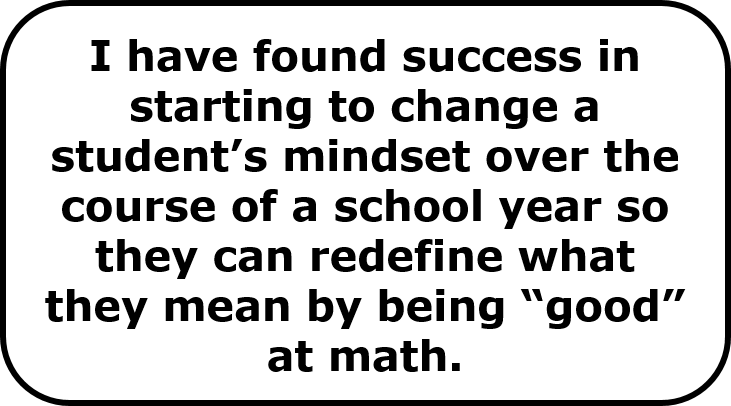 easy for people to hold this fixed view. I was first introduced to the research of Carol Dweck in my psychology and education classes in college. From my reading of her research, I learned that when people in positions of authority, like teachers and parents, focus on outcomes/achievement over process, we can influence a child to hold a more fixed mindset in that area and thus impact their overall motivation and perseverance. When I was taught math in school, I was often given either full credit for the correct answer or no credit if the final answer was incorrect. In more traditional math classrooms, teachers often explain one way to complete a problem (typically the most efficient way to do it), have students memorize that process, and then have them practice it over and over until they do it "without having to think". In my opinion I think grading practices and a more "traditional" model of teaching mathematics has contributed to the number of people who hold such fixed mindsets around the study of mathematics. The processes of mathematics have been boiled out in more traditional models with only the correct final answers and memorization left. When families think back to math classes they had, it may bring them back to outcome-based, right or wrong, class after class that then elicits this fixed mindset.

Many students come to high school math classes almost proudly professing to me that they hate math and have always struggled. From day one these fixed mindsets start to show themselves by the use of absolutes such as phrases including always and never. When I start making contact home, I have found very direct correlations between the students who struggle and give up quickly with the families that use their own experiences with math as justification for their students' progress. It is very hard to chip away at a deeply held fixed mindset in math, especially when you only see students for one hour a day at the high school level. Despite this uphill push, I have found success in starting to change a student's mindset over the course of a school year so they are at least more open to the idea that they could be "okay" or even "good" at math and redefine what they mean by being "good" at math.

Starting with the Families: At the first open-house event, I encourage families to try a mini math puzzle that has multiple ways to get to the same final solution. This gives me the opportunity to talk about what to expect from this upcoming math class and emphasize that math is about noticing patterns, using patterns to make generalizations, and making sense of processes students already hold so they can apply them to novel contexts.

Rephrasing and Personal Put-downs: When a student says something like, "I don't get this!" I have a standing policy that we as a class will add the word yet on the end. This emphasizes to students that I believe they are all capable of being successful at what we are doing in class and that they will understand it with enough practice and effort. We also discuss put-downs at the beginning of the year, and I make sure that students are clear that personal put-downs are just as harmful as putting down others in the learning environment. When students say these personal put-downs aloud, I encourage them to rephrase those as well. For example, "I'm not a math person" can become "I'm not a math person, yet."; "I stink at math" can become "I am struggling right now with_________________."

Emphasizing Mistakes as Learning Opportunities: I frequently use student work as a point of discussion. When working out problems together or looking at a student's work inevitably a student will complete a step incorrectly or get the wrong solution. Instead of ignoring this or minimizing the mistake, I thank the student for showing us this. Mistakes often highlight bigger misconceptions that many students in class hold and get us thinking again about the process (what parts would we keep, what parts would we change). I also will post multiple papers with the problem worked out differently but with the same final answer.

Hard-work Reminders: After tests or big assessments, I typically do some number crunching and share that data with students. For example, I calculate the average number of missing assignments and average days absent based on score ranges. I almost always find that students who score higher on the assessment have fewer missing assignments from the unit and fewer absences. These are great data points to show students who feel like students that get "A's" on tests get them easily or don't have to put in effort like they do. Connecting effort and hard work with assessment scores helps motivate students to see that if they put in more they get more in return (i.e. feel more confident going into assessments, score higher on assessments, can contribute to group conversations, help classmates when they're stuck, etc).

Specific/ Effort Oriented Praise: As Carol Dweck's research has pointed out, how we praise students can make lasting impacts on the mindset they are developing. I make sure to give students specific praise with concrete details. I also steer away from using absolutes like "always" and "never" since those words have the tendency emphasize a more fixed mindset. For example, instead of saying, "You always score so well on assessments" changing the praise to, "You worked so hard this unit. You turned in all your assignments, took notes, regularly shared ideas with the whole class, helped your group members throughout the unit... Your efforts really showed on the assessment."

Partial Credit: Assessment practices and grading policies communicate volumes to students about what exactly learning is and how it is done. I am a firm believer that giving students partial credit for a correct process communicates directly to them that process matters. In math in particular the final answer is important, but the process is also an important piece. By giving partial credit and with such emphasis on assessments in our current school culture, this directly tells students process, the why, matters. *Side note: I have been called "soft" on students for giving partial credit by fellow teachers in the past. Many math teachers in earnest are trying to prepare their students for "real life" by being tough on them and not giving partial credit. I can't remember a math professor I had in college that didn't give partial credit, especially when working on complex problems that at times would take a page or more of work. After I finished the calculus series nearly every math problem completed from then on is in a proof form. When writing proofs you have to utilize many different processes, with no one correct pathway, and how you get to your final conclusions are even more important sometimes then what you end up concluding. Often you already have in mind what you are trying to prove, the real work starts in how to get there. Teaching students that process matters is very much preparing them for real life in more applied math situations and for working in collaborative teams in which they will have to be able to clearly communicate their ideas on how they are solving the problem at hand.

Assessment Policies: I have also noticed changes in my students' motivation when they know that retaking an assessment is an option. They are less likely to take a low assessment score as a message of failure, but instead as an opportunity to continue learning (a low score simply means they are not done yet). My hope is that this communicates to students that everyone may learn at slightly different paces and that's okay. I also feel it is more congruent with how I feel about learning in general: if you don't get something the first time you try it, keep working at it until you do understand it.

Cindel Tobias has a BA in Mathematics and Psychology from Pacific Lutheran University and a Master in Teaching from The Evergreen State College. She has been a high school math teacher for 5 years and recently was announced the "Distinguished Educator of the Year" by TESC. When Cindel's not grading, lesson planning, or reading about new teaching practices/research, she is spending time with her cat, five chickens, and partner Gary in their bungalow in Olympia, WA.

I am a firm believer that the most important "E" word in education is Effort & instill that & the power of "Yet" within each new class. For 16 years I have used cut out ANTs (Red & Black)to help my 5th graders & their families understand how our brain talk impacts our learning. ANTs are Automatic Negative Thoughts which invade each time we approach a new skill or situation. Red ANTs are the dangerous ones which create distress & the desire to run from the task. Black ones create a bit of Eustress & the desire to try a bit harder. Armed with this knowledge that ANTs are natural, students begin to embrace incorrect answers as an opportunity to learn & grow. It is such an inspiration to see the Growth Mind Set spread throughout our district. Thanks for sharing more great ways to help bridge the gap between fixed & growth mindsets.

1 Cancel Reply
I am a firm believer that the most important "E" word in education is Effort & instill that & the power of "Yet" within each new class. For 16 years I have used cut out ANTs (Red & Black)to help my 5th graders & their families understand how our brain talk impacts our learning. ANTs are Automatic Negative Thoughts which invade each time we approach a new skill or situation. Red ANTs are the dangerous ones which create distress & the desire to run from the task. Black ones create a bit of Eustress & the desire to try a bit harder. Armed with this knowledge that ANTs are natural, students begin to embrace incorrect answers as an opportunity to learn & grow. It is such an inspiration to see the Growth Mind Set spread throughout our district. Thanks for sharing more great ways to help bridge the gap between fixed & growth mindsets.
Cancel Update Comment

Articles
A Work in Progress: Growth Minded Assessment
Articles
Why People are Afraid of Math
View all related posts